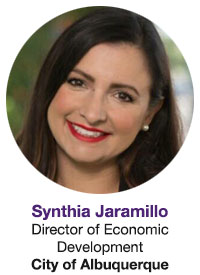 Synthia is the first woman to lead the City of Albuquerque’s Economic Development Department. Under Synthia’s leadership, companies such as Carenet, Advanced Network Management, Netflix, NBCUniversal and Jabil have chosen to expand into Albuquerque. Synthia has also led efforts to support small business in Albuquerque by leading the implementation of programs such as Engage, Job Training Albuquerque, Tipping Points, and the Small Business Office.

Prior to her role with the City, Synthia spent nearly two decades at the Albuquerque Hispano Chamber of Commerce in various roles, with her most recent role as Chief Operating Officer.

Synthia will be presenting Economic Development in Albuquerque during the B2B Expo ProTalks pre-event.

EXHIB-IT!'s annual B2B event is a great opportunity to showcase your business to the Albuquerque networking community as well as introduce yourself to other local businesses and strengthen business relationships you've already started. HUNDREDS attend each year. It truly is a "don't miss" event.

The B2B Expo NM is by far the largest collective of local talented entrepreneurs under one roof, and a great event for critical business-to-business networking. I loved it!

The relationships I have developed through the strategic networking at DJ's B2B Event has been an asset for our business. There has always been fantastic energy and collaboration at every event. People, this is one event you do not want to miss!!!

The business to business aspect of the event is fantastic! It really gives us a chance to
showcase our food and service while in a relaxed, inviting environment. We have made many connections and gained new catering clients and restaurant customers every year.

The ability to interact with other businesses and the support of local charities makes this a very worthwhile event. We very much look forward to being a Platinum Sponsor at the upcoming 10th Annual B2B Expo.

EXHIB-IT's Annual B2B event is probably one of my favorite and absolute MUST-ATTEND events I look forward to each year. The connections I have made at this event are truly priceless, and have catapulted my business forward.

Exhib-it’s B2B Expo is THE networking event of the year. This is our fourth year as an exhibitor and sponsor because it’s the one event in which we participate that always results in expanding our brand AND our client base. Each year’s event improves over the last!

I LOVED last year’s B2B event. I made new connections, gained valuable knowledge that I continue to use today, and met new prospects who became clients. We are proud to sponsor the 2020 event again this year!