The 10th Annual B2B Expo, New Mexico’s largest Strategic Networking event & Business-to-Business Expo last week was a huge success with a packed house of 853 in attendance plus EXHIB-IT!’s new Technology App for Attendees making it easy to track attendance and attendee preferences. The event broke previous attendance records with 787 attendees and 125 exhibitors representing more than 43 industries. Additionally, over 100 people attended educational roundtables prior to the Expo’s kick off. The “Pay-it-Forward” Silent Auction raised over $2,866 with all proceeds benefiting Victory Outreach Albuquerque. 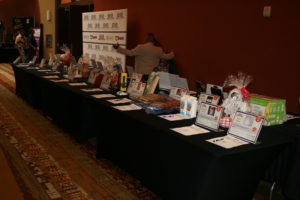 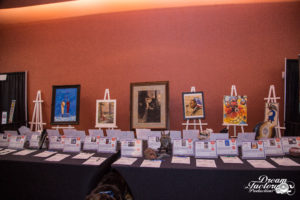 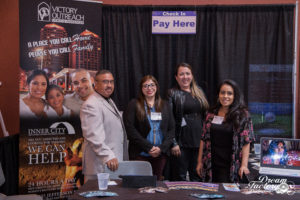 “Given our record numbers, it is obvious business people are looking for an opportunity to network, learn and make important connections,” said DJ Heckes, founder of the B2B Expo and CEO of EXHIB-IT! “There are many industry trade shows, but nothing dedicated solely to business. We have already secured the date for next year’s event – Tuesday, April 24, 2018, with many returning Sponsors already committed.” 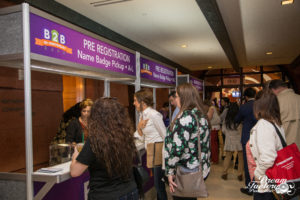 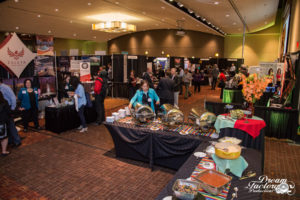 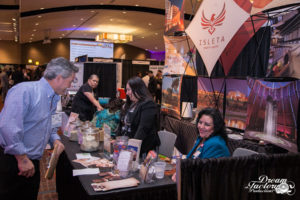 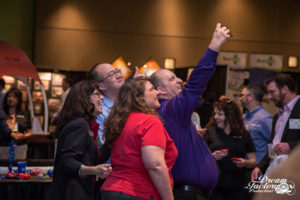 Next was the Main Event that started off with a Meet & Greet with All Albuquerque Mayoral Candidates from 4-5 PM.

We captured 8 of them early enough for a photo opportunity while the others were still in route, but all 13 showed up to the 10th Annual B2B Expo.

Best Local Brand Winners were announced after LIVE Voting ended at 6:30 PM at the event. The voting breakdown for our winners was Mark Pardo Salon Spa at 1,384 and Best Buddies of New Mexico at 217. A total of 3,077 votes were cast (an average of 106 votes per day!). A total of 493 votes were placed on the day of the event itself.

After 5 PM, the event was full of strategic networking with attendees and exhibitors throughout the event. You could feel the excitement in the air while walking the event and see people truly interacting. The event did not end until 8 PM and then the VIP Sponsor Thank you Party started at 8:30 – 10:30 PM in the Concierge Suite, which was a private party hosted by EXHIB-IT! for Sponsors, Roundtable Speakers and Ambassador Volunteers.

The 10th Annual B2B Expo provided us with some valuable insights from past events. This year we were able to gather better metrics on Attendee Satisfaction from our Post-Event Survey. In our Exhibitor Booth Camps that we held prior to this event, we discussed the importance of a Return on Relationships, knowing also that the metrics will play a big part of a Return on Investment also.

See below for some of our more recent testimonials provided from our survey responses.

“Based on my first time, I’ll definitely be back” – Janet McEwen, American Society of Radiologic Technologists

“We picked up enough leads to make it worth attending, and might even be interested in a booth for next year!” – Scott Klinkhammer, SignArt of New Mexico

“I had a large crowd in front of my booth. It was actually overwhelming in a good way. I have 10 strong leads and about 25 interested. It was totally amazing. Can’t wait until 2018.” – Tony McKenzie, Action Audio Visual

“The 10th Annual B2B Expo NM Event delivered everything promised by the host and what I told others when inviting fellow networking individuals. I’ll start NOW to invite others to next year’s event.” – Steve Reimann, KNKT 107.1 FM at Calvary ABQ

“Really enjoyed the Roundtable presenters.  What a great opportunity to get closer to company heads to learn their culture and marketing strategy. Good mix of networking individuals as well.  Look forward to next year.” – Dawn Bodenner, DMC Logistics

EXHIB-IT!'s annual B2B event is a great opportunity to showcase your business to the Albuquerque networking community as well as introduce yourself to other local businesses and strengthen business relationships you've already started. HUNDREDS attend each year. It truly is a "don't miss" event.

The B2B Expo NM is by far the largest collective of local talented entrepreneurs under one roof, and a great event for critical business-to-business networking. I loved it!

The relationships I have developed through the strategic networking at DJ's B2B Event has been an asset for our business. There has always been fantastic energy and collaboration at every event. People, this is one event you do not want to miss!!!

The business to business aspect of the event is fantastic! It really gives us a chance to
showcase our food and service while in a relaxed, inviting environment. We have made many connections and gained new catering clients and restaurant customers every year.

The ability to interact with other businesses and the support of local charities makes this a very worthwhile event. We very much look forward to being a Platinum Sponsor at the upcoming 10th Annual B2B Expo.

EXHIB-IT's Annual B2B event is probably one of my favorite and absolute MUST-ATTEND events I look forward to each year. The connections I have made at this event are truly priceless, and have catapulted my business forward.

Exhib-it’s B2B Expo is THE networking event of the year. This is our fourth year as an exhibitor and sponsor because it’s the one event in which we participate that always results in expanding our brand AND our client base. Each year’s event improves over the last!

I LOVED last year’s B2B event. I made new connections, gained valuable knowledge that I continue to use today, and met new prospects who became clients. We are proud to sponsor the 2020 event again this year!